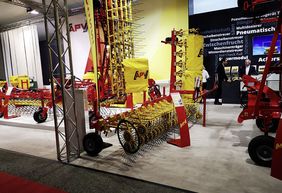 On November the 21, a total of 350 exhibitors in the field of agricultural technology, stables, seeds and fertilizers exhibited their machines and innovations. On a total of 52,000m2  around 57.000 visitors were distributed.

The Tined Weeder VS 900 M1 adjusts with its unique tine spring system to the soil and protects the culture plant at the highest level. Due to the spring system, the tines are perfectly adjusted to the ground, which means the tine pressure remains constant with varying tine levels. As a result, crops planted on ridges, such as the potato, can also be harrowed.

Tined Weeder AS 1200: The 7mm tines take care of the crucial work. They are arranged in a tine spacing of 31.25mm and in 6 rows. The main focus is on combating unwanted weeds.

Rotary Hoe RH 600 M1: The rotating hoe rings bury or uproot the weeds, promote the tillering of the culture, introduce oxygen into the soil and break up hard soil crusts. Due to the rotating rings, the tines remain free of plant and soil material.

Grassland Combi GK 300 M1: The GK 300 M1 is very well suited for meadow cultivation, reseeding and new seeding of grass on flat and steep surfaces. The combination of powerful 12mm tines and the trailing roller enables that the sward is processed and the seed is directly pressed down.

APV attracted every day a lot of people and show each visitor the corporate mission: "Inspired by farmers and realized by professionals."